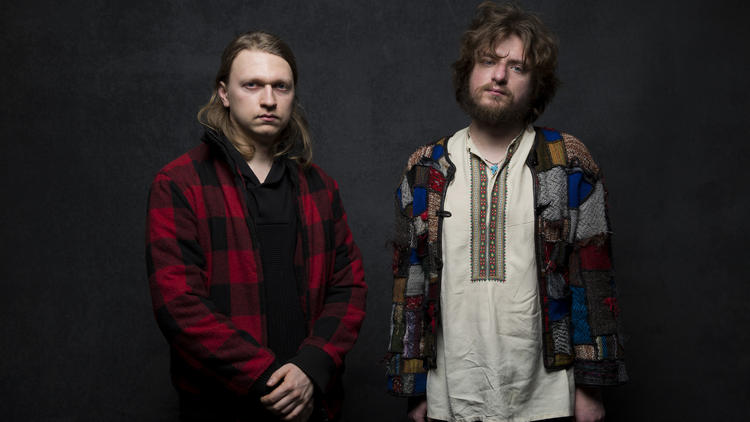 As movie executives arrived at the Sundance Film Festival this week from places like Beverly Hills and the Upper West Side, Artem Ryzhykov took a more perilous route.

The cinematographer and star of a new documentary titled “The Russian Woodpecker” had flown in to Park City from Ukraine, where as recently as last week he had been at the country’s eastern battleground of the Donetsk airport, snapping photos while dodging sniper fire from pro-Russia separatists.

Ryzhykov had come to the festival with Fedor Alexandrovich, a wild-eyed Kiev artist who seems to have stepped straight out of a Dostoevsky novel. The pair was unveiling its new documentary, whose cartoonish-sounding title belies its intensity of purpose.

Directed by the first-timer Chad Gracia, the serious and surreal “Woodpecker” seeks to make a connection between an elaborate Cold War-era communications weapon and the massive Chernobyl disaster.

But almost as important as the film’s investigation into that dark chapter is its political message -- that a desperate and militant Vladimir Putin could well wreak havoc in Ukraine and a number of other former Soviet states.

Though a decidedly entertaining effort, overflowing with conspiracy theories and secret cameras, “Woodpecker” also is a deadly dramatic work, a wild tale by way of historical injustice.

“I don’t care about the danger to me,” said Ryzhykov via a translator as he described his recent activities in the war-torn Donbass region of Ukraine. “I care that a country and a people are losing their freedom because of Russian nationalism.”

As he and Alexandrovich sat, somewhat incongruously, in a Sundance lounge Friday afternoon, events thousands of miles away were unfolding that bore out their warning. Military conflict in eastern Ukraine was exploding, shattering a tenuous cease-fire, as indications mounted that the Russian military was vastly increasingly its activity in the region.

And so “The Russian Woodpecker,” which debuts at the festival Saturday, had almost overnight become a Sundance rarity -- less another piece in the festival’s broad tapestry of issues that can be gazed upon safely amid fashionable parties and beautiful mountain scenery and more an eerie prophecy, told via a movie screen, of global aggression and suffering.

“As I got further into the movie, it became clear it was extremely serious and timely, because it said something not only about Chernobyl but about what’s happening right now,” said Gracia.

First, the subject of the movie itself. (Hang on, it’s a strange one.)

For decades, an odd woodpecker-like sound, at 10 beats per second, would jam Western frequencies in what experts believed was a Cold War communications weapon used by Moscow. As a piece of ammunition, the woodpecker wound up falling short of expectations — the Northern Lights degraded its ability to reach the U.S. effectively — but its origin was a source of great speculation and mystery.

The woodpecker came at Western channels via the Duga, a massive, otherworldly structure the Soviet Union placed suspiciously right near the Chernobyl reactor outside of Kiev years before it melted down.

The Ukrainian duo’s argument, assembled as they investigate, is that the increasingly apparent failure of the Duga led to officials’ decision to provoke the Chernobyl disaster.

The pair argue that George Kopchinski, a top Russian nuclear regulator, made a call to workers at the plant to carry out a dangerous action that led to the meltdown. That call, the stars of the film say, was made at the behest of the late communications minister Vasily Shamshin, one of the chief architects of the Duga and a man who might have had a lot to lose when the station was discovered not to be working properly.

It is an allegation that, if true, would have incendiary consequences, suggesting that one of the worst disasters of the Cold War was caused by a self-protective Kremlin official.

“If true,” though, is a key phrase. Many experts believe Kopchinski placed the call, but they are far from agreed on the reasons for it. The Shamshin theory is considered even further afield, with few scholars subscribing to it. (Much of the documentation from that time is sealed, and other papers are thought falsified.)

But in many ways the truth of the theory is secondary to the story and the political urgency the characters embody — as well as the film’s portrayal of a Russia going to disturbing lengths to protect its interests.

As the pair seek information from ex-KGB and Russian military officers, the reticence of the officials, especially when an American like Gracia was present (the director would later come to hide in the closet during interviews, feeding the Ukrainians questions), bolsters the case of a Russian establishment far from ready to make amends.

A similar impression is left by the film’s graphic footage, familiar but still compelling, of protesters beaten in Kiev’s Independence Square a year ago by forces loyal to the pro-Russian former leader Viktor Yanukovich. As Alexandrovich says in the film, with his characteristic mix of poetic hyperbole, “The undead Soviet ghoul is pushing us toward World War III.”‎ Like many in Ukraine, he and Ryzhykov see in events like the Ukrainian Revolution and the Chernobyl disaster not discrete tragedies but a continuum of Russia-led aggression and Ukrainian victimization that stretches back hundreds of years.

The moral turning point of “The Russian Woodpecker” comes about two-thirds of the way through, when Alexandrovich recounts to Ryzhykov that secret police officers working on behalf of Russia have paid him a visit because of the all the poking around they’re doing for the film. Alexandrovich, who is animated by a desire to uncover the truth about Chernobyl because the disaster left him with radiation poisoning as a child, suddenly has a change of heart. He recants all his theories and tells his friend the movie must be stopped. (Ryzhykov is filming all this, unbeknown to Alexandrovich.)

“I can’t say too much about it, because I still am worried for the safety of me and my family,” Alexandrovich said on Friday.

But it’s clear there were threats, and he made a choice that, as he said in the interview, “make me the hero and the antihero.” (Gracia later gives Alexandrovich a moment of redemption when the latter is seen standing up in front of huge crowds during the Ukrainian revolution and declaring his theories on Chernobyl, slamming the Russian government, an act that was hugely risky at the time.)

Friends and longtime collaborators, the Ukrainian pair hooked up with Gracia when Alexandrovich began talking — fittingly — about the woodpecker with an incessant clamor as the two prepared a play in Ukraine. Gracia, a theater director who improbably helped CIA officers after Sept. 11 with information he had gathered as an English tutor in Saudi Arabia (no one involved with this film, apparently, is just an ordinary citizen), had his own moments of mistrust. He wondered if Ryzhykov and Alexandrovich were secretly Russian officers spying on him, even as they had similar anxieties about the director.

“But then thought he looked so much like Central Casting version of CIA,” said Alexandrovich about the middle-aged filmmaker with a fine layer of stubble, "that I knew he couldn’t be CIA.”

Rhyzkhov's life has followed its own dramatic arc.

An activist and filmmaker during the revolution that ousted Yanukovich a year ago, he was shot at by pro-Yanukovich police officers, saved only by bullets hitting his camera. Though bleeding badly, he couldn’t go to the hospital because of reports that demonstrators taken there were later being disappeared in forests by pro-Yanukovich forces.

Fears of that kind persist, especially with the film complete. Gracia said that “even though I think Putin has bigger problems right now, this new climate is worrisome, and I certainly wouldn’t feel safe in Russia, or even in a London sushi shop. Things can happen anywhere.”

Ryzhykov, who like Alexandrovich will return to Ukraine after the festival, said he still aims to travel to Russia, where he has family, as well as Donetsk. “I know what can happen to me,” he said. “But I make films and take photos. Am I going to spend my life worrying about a sniper?”